Hexagon announces partnership with Airbus for near real-time

Hexagon’s new technology enables detection of underwater objects in near real-time, a significant innovation in the airborne bathymetry industry. The cutting-edge solution was developed to meet Airbus’ requirements and will first be implemented in two C295 MSA purchased by the Irish Air Corps (IAC). The unique object detection feature enables real-time LiDAR data visualisation and analysis during the flight. Being able to locate the precise position of the object allows operators to preview and analyse information captured below water immediately — a process which previously could take up to several days.

“We are delighted to announce the innovative application of the Chiroptera 4X sensor which now identifies small, submerged objects close to real-time, making bathymetric object detection faster than ever before,” says Anders Ekelund, VP for Bathymetric LiDAR Sensors at Hexagon. “With this latest innovation, we are expanding our current system, adding significant capabilities for the maritime surveillance industry, and introducing new applications for airborne bathymetry.”

RICHMOND HILL, CANADA, Nov. 25, 2021—Applanix, a Trimble Company (NASDAQ: TRMB), and the National Oceanic and Atmospheric Administration (NOAA) recently collaborated to provide critical information to first responders in the wake of Hurricanes Henri and Ida. Applanix’s high-accuracy direct georeferencing (DG) technology enabled NOAA to quickly collect aerial mapping imagery to (1) provide valuable disaster remediation information to first responders and (2) demonstrate the value of cutting edge mapping technology in preparing for and responding to emergency situations such as hurricanes, tornadoes and other disasters. Within hours of Hurricanes Henri and Ida making landfall, NOAA’s National Geodetic Survey collected post-storm imagery using the latest generation Digital Sensor System (DSS). The sixth-generation DSS, designed and manufactured for Applanix by Lead’Air, is the most powerful to date, thanks to several new features introduced within the solution:...

In January RAI Amsterdam will once again be the center of the international drone community for three days. During the fourth edition of Amsterdam Drone Week: ADW Hybrid, from 18 to 20 January 2022 - there will be an extensive program and matchmaking facilities. ADW Hybrid will bring all key players, big and small, commercial and non-commercial, from various industries, knowledge institutes and authorities, together to co-create and co-operate. Adding value to society with urban air mobility.

During ADW Hybrid the UAM community gathers again to share knowledge on current air solutions, potential innovations and vital regulations. For the first time Amsterdam Drone Week will be a hybrid event, meaning live and online accessible. Matchmaking will also be accessible live and online. The ADW Mainstage, ADW Conference, ADW Industry sessions powered by CUAV and the HLC on Drones will be livestreamed for online delegates.Although the official program starts on Tuesday 18 January, ADW Hybrid will kick off on Monday 17 January with a U-Space Demonstrator Network Meeting and the famous ADW High-level Dinner. Both can be visited by invitation only.

“Our customers in the Energy sector are realising the transformative...

SINGAPORE, Nov. 29, 2021 — (PRNewswire) — Huawei's Petal Maps app today announced the launch of its version 2.0 update, adding a set of powerful new features which help to enhance the navigation experience. These useful enhancements include "Lane Guidance", a feature which helps users to identify and navigate complex road and traffic scenarios as well as the "Offline Map" function, which enables Petal Maps to be used with limited internet access. In addition, the app also received a redesigned user interface and incorporated a gamification system that rewards users for using the app. 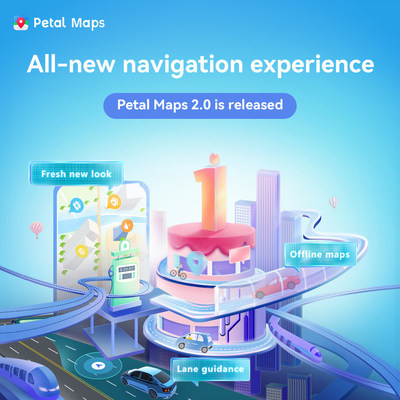 The rollout of Petal Maps 2.0 also marks the celebration of the map and navigation app's 1st anniversary. Developed by Huawei Mobile Services (HMS), launched in October 2020 in APAC, Petal Maps was conceived to provide innovative travel and navigation experiences, following the brand's mantra to empower users with "a new way to explore the world".

Since its release, the app has grown to serve more than 20 million users in over 160 countries, providing functions such as location searches, turn-by-turn navigation, and real-time traffic updates. Over the span of a year, the app has gained new...

Steve Fendley, President of KUSD, said, “The recapitalization of strategic weapon systems by the United States and its allies is driving significant global demand for Kratos target drone systems, which represent certain leading technology system and platform threats of our peer adversaries.  At Kratos, affordability is a technology, and our high performance target and tactical drone systems are representative of our affordability mission. The broad application set of these drone systems as well as the speed at which they can be developed, produced, modified, and reconfigured creates the...

Airobotics has joined the fight against Malaria and entered a new market, signing an initial contract with Zzapp Malaria to supply aerial data and analysis as part of Malaria eradication efforts in São Tomé, Africa.

Malaria is a preventable disease spread by the Anopheles mosquito. According to the WHO (World Health Organization), there are over 220 million cases of Malaria every year, causing over 400,000 deaths – 67% of which are children under 5. Nearly half of the world's population is at risk of Malaria, with the WHO African region accounting for almost 95% of world Malaria cases and deaths.

The two largest bodies alone (the Global Fund and US government funding) spend close to $2.5 billion annually on Malaria control.

Airobotics will use autonomous drones to provide fast, detailed mapping of standing water bodies in São Tomé. The mapping will enable Zzapp Malaria's AI platform to analyze the water bodies and to identify and predict mosquito breeding grounds. Zzapp will then create and monitor an efficient strategy to disrupt mosquito breeding...

Insights From One of the Speakers on The Largest UK’s

The event takes place in ExCel, London from November 24-25, 2021 where it has gathered:

This year GEO Business 2021 provided an inspiring keynote and seminar program by leading industry experts and almost 100 hands-on demonstrations of the latest in geospatial.

Intetics Inc. is proud to announce that Illia Ovcharenko, Software Engineer at Intetics, is among speakers on the stage GIS&Data hub on November 24th with the topic ‘Deep Learning on point cloud data’ where attendees may know and learn key points:...