Cambridge, ON – July 6, 2020 – exactEarth Ltd. (TSX:XCT) (“exactEarth” or the “Company”), a leading provider of Satellite-AIS data services announces an expanded alliance agreement (the “Amended Agreement”) with one of its existing channel partners (the “Partner”). All financial figures are in Canadian dollars unless otherwise stated.

The Amended Agreement extends the current agreement between the companies by three-and-a-half years through to December 2023. exactEarth estimates that this Amended Agreement will generate additional incremental revenues of approximately $7.0 million, or $2.0 million per year on an annualized basis. Under the terms of the Amended Agreement, the Partner is able to deploy exactEarth’s exactViewTM RT advanced real-time Satellite-AIS data services into their full range of advanced maritime analytics products, derived services and international data customers. The agreement also provides both Parties with expanded reseller rights which enable further sales potential over the term of the agreement.

“We are pleased to significantly expand our relationship with this Partner, who is a leading information and data analytics provider,” said Peter Mabson, President & CEO of exactEarth. “Expanding and building on key channel partner relationships is an important part of our growth strategy which we believe will help us increase our market leadership and achieve our key financial objectives such as continued revenue growth, positive Adjusted EBITDA and positive cash...

Satellite for US Air Force Successfully Launches as Part of

MELBOURNE, Fla., July 6, 2020 — L3Harris Technologies (NYSE:LHX) launched the latest in a demonstration series of end-to-end small satellites as part of a U.S. Air Force constellation the company is responsible for developing.

As the prime contractor for the firm fixed-price development space mission, L3Harris is designing, developing, building, testing and deploying the satellites. The company will task, command and control the satellite system, as well as perform on-board processing of data to deliver imagery products directly to warfighters on tactical timelines.

“L3Harris has developed and supported various aspects of satellite missions over the last several decades as a component supplier or hosted payload,” said Ed Zoiss, President, Space and Airborne Systems, L3Harris. “In collaboration with the U.S. Air Force, we pulled the pieces together to successfully plan, develop and execute an affordable, high-performance space mission, which is part of a responsive constellation contract.”

Des Plaines, IL (July 5, 2020)  As many expected and in recognition of the health risks posed by the Coronavirus (COVID-19) and decisions by governments and businesses to continue to practice social distancing, URISA has postponed this summer's Minneapolis and Portland offerings of  the URISA GIS Leadership Academy to next year. The St. Petersburg, Florida event remains on the schedule for November.

At the same time, we have seen that the demand for GIS leadership training is higher than ever. URISA GIS Leadership Academy faculty are working optimizing delivery for instructor-led online GIS leadership training. Because the interaction of each cohort is so important in the Academy, we are limiting attendance at the first virtual GLA to thirty (30) individuals.  The first Virtual URISA GIS Leadership Academy will take place during the week of August 3-7.

The curriculum emphasizes best practices and skills-based training taught by GIS experts committed to preparing others for leadership in managing challenges and figuring ways to help groups and organizations achieve their goals.  As with the in-person program, attendance at the GLA earns substantial GISP® Education Points.

GIS can help in planning how to ease COVID-19 lockdown restrictions by using spatial analysis.

The post How GIS is Being Used in Planning the Easing of COVID-19 Lockdown Restrictions appeared first on GIS Lounge.

Description: This movie, based on images taken by ESA’s Mars Express, showcases the 82 km wide Korolev crater on Mars.

Located in the northern lowlands of the Red Planet, south of the large Olympia Undae dune field that partly surrounds Mars’ north polar cap, this well-preserved impact crater is filled with water ice all year round. The crater’s floor lies two kilometers below its rim, enclosing a 1.8 km thick domed deposit that represents a large reservoir of non-polar ice on Mars.

Water ice is permanently stable within Korolev crater because the deepest part of this depression acts as a natural cold trap. The air above the ice cools and is thus heavier compared to the surrounding air: since air is a poor conductor of heat, the water ice mound is effectively shielded from heating and sublimation.

The crater is named after chief rocket engineer and spacecraft designer Sergei Pavlovich Korolev (1907-1966), dubbed the father of Russian space technology. Korolev developed the first Russian intercontinental rocket R7, the precursor of the modern Soyuz rockets that are still operated today. With his rocket and spacecraft design, he was also responsible for the first human-made satellite (Sputnik in 1957) and for the first human spaceflight (Yuri Gagarin in 1961).

This movie was created using an image...

PIETERMARITZBURG, South Africa, July 6, 2020 — (PRNewswire) — Drones, with specialty spraying technology, was deployed for a recent sugarcane ripening trail in South Africa, showing an evident increase in the amount of sugar extracted from these canes. This might signal a potential improvement in profit margin for the cane growers, who have been incurring loss from the country's ailing sugar industry. 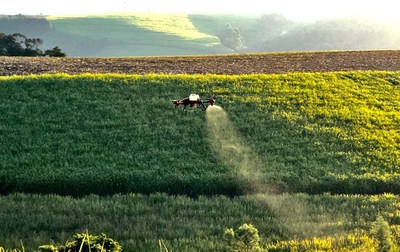 Primarily grown in tropical and subtropical regions, sugarcane is the type of perennial, high-value cash crop that serve as juicy fruit as well as the major feedstock for sugar production. South Africa ranks the world's top 15 sugar producing countries that provide cost-effective, high-quality sugar products. However, due to a series of interweaving threats, mainly the influx of cheap imports and the imposition of sugar tax, South Africa's $833 million sugar industry has been struggling to stay competitive in the global market. Crop-spraying drones, meanwhile, gently tap in and get prepared to give a new lease of life to this industry.

This June, in Seafield Farm, located at the Midlands South region of KwaZulu-Natal, a new round of sugarcane harvest arrived. What made this harvest season special was that a commercial ripening trial was conducted for the first...

Mr. Larson brings over 20 years of combined operational, corporate finance, technology development and entrepreneurial experience to the Board. Previously CEO of Kater, a Vancouver-based mobility as a service (MaaS) company building out an integrated intermodal transportation platform incorporating public transportation, buses, taxis and ride haling vehicles into a single service. Previously, Mr. Larson has been CEO and co-founder of Helios Wire, a satellite company building out a space-enabled IoT/M2M network, and was CEO/Co-Founder of UrtheCast. Mr. Larson helped scale the company from its inception, taking it public on the Toronto Stock Exchange, raising $200 million, and leading the company to 250 employees over five years with seven offices around the world.

“Draganfly has gone through significant expansion over the past six months, and we need additional leadership to help guide the company through its next phase of evolution....

REGINA, SK, July 3, 2020 /CNW/ - The Brandt Group of Companies is pleased to announce that, effective July 2, they have successfully acquired the assets of Ontario-based Sokkia Canada. This acquisition, which directly affects the Ontario and Quebec markets, makes Brandt the exclusive dealer for Sokkia optical survey instruments, accessories and parts for the entire Canadian market.

The news signals Brandt's entry into Central Canada's geopositioning technology market and is the latest in a growing list of acquisitions and dealer agreements made by the Regina, SK-based company since their purchase of Ontario/Quebec/Newfoundland and Labrador John Deere Construction & Forestry dealer Nortrax in late 2019.

"Expanding our Sokkia offering into Ontario and Quebec has been a high priority for Brandt," says Brandt CEO, Shaun Semple. "Central Canada is an important new market for us and we are 100% committed to delivering exceptional value for the survey, engineering and construction industry here. This addition is a big step forward for us."

The Sokkia product lineup will be distributed and supported through the company's Brandt Positioning Technology division and includes total stations, Global Navigation Satellite...

The team will be developing a single, integrated Contingency Management Platform for unmanned aircraft integration. Together with NUAIR, (Northeast UAS Airspace Integration Research) and Oneida County, the team will integrate and test their CMP technology to address specific safety and risk mitigation concerns for operating UAS in the national airspace the NY UAS Test Site.

Complex integrated systems, like unmanned traffic management, rely on a multitude of data from various sources to make...