Susan Smith
Susan Smith has worked as an editor and writer in the technology industry for over 16 years. As an editor she has been responsible for the launch of a number of technology trade publications, both in print and online. Currently, Susan is the Editor of GISCafe and AECCafe, as well as those sites’ newsletters and blogs. She writes on a number of topics, including but not limited to geospatial, architecture, engineering and construction. As many technologies evolve and occasionally merge, Susan finds herself uniquely situated to be able to cover diverse topics with facility. « Less[1]

Susan Smith
Susan Smith has worked as an editor and writer in the technology industry for over 16 years. As an editor she has been responsible for the launch of a number of technology trade publications, both in print and online. Currently, Susan is the Editor of GISCafe and AECCafe, as well as those sites’ … More »[2]

The GeoInnovation National Speaker Series, a national speaker series focused on geospatial innovation that shines a monthly spotlight on St. Louis’ fast-growing geospatial ecosystem, will examine these and other questions in its April edition. “The Pandemic and Beyond: how geospatial technology is helping health care” will take place via Zoom Wednesday, April 7, 2021, from 2:00 p.m. (CT) to 3:00 p.m. (CT).

The GeoInnovation National Speaker Series is a collaboration between innovation hubs Cortex[1] and T-REX[2] and GeoFutures[3], an initiative...

CHESEAUX-SUR-LAUSANNE, Switzerland, 16th March 2021 – senseFly, the global leader in fixed-wing mapping drones, has announced a new distribution partnership with North Carolina-based Tough Stump Technologies. The partnership is designed to help professionals and organizations in the defense and governmental sectors with the collection and analysis of aerial intelligence and tactical mapping data using advanced UAS (drones).

“This collaboration has been a game-changer for government organizations carrying out tactical mapping missions. Where traditional satellite and manned aircraft methods leave a gap in the accuracy and quality of data collection, we’ve shown that drones – combined with the right software and training – can provide significant value to units,” said Ben Brown, co-founder/CFO at Tough Stump Technologies.

The ARTEMIS package offers customers access to a deployment kit, a four-day training program and 12-months of support and maintenance, in addition to the eBee X – senseFly’s flagship fixed-wing mapping drone.

STOCKHOLM, April 1, 2021 — (PRNewswire) —Hexagon's Annual Report 2020 and separate Sustainability Report is now available at Hexagon's website hexagon.com. Hexagon intends to solely distribute the reports digitally. If you however still want to receive a printed copy of the Annual Report, please contact Hexagon atThis email address is being protected from spambots. You need JavaScript enabled to view it.[1] or call +46 (0)8 601 28 20.

This information is information that Hexagon AB (publ) is obliged to make public pursuant to the Securities Markets Act. The information was submitted for publication at 08:00 CET on 1 April 2021.

This email address is being protected from spambots. You need JavaScript enabled to view it.[2]

This information was brought to you by Cision http://news.cision.com[3]

ST. LOUIS, April 1, 2021 /PRNewswire-PRWeb/ -- The NGA Accelerator Powered by Capital Innovators recently selected eight companies from more than 350 applicants to participate in the March 23 launch of the inaugural cohort of its geospatial corporate accelerator program based in St. Louis. The NGA Accelerator is managed through a Partnership Intermediary Agreement between the Missouri Technology Corporation, NGA and Capital Innovators.

Each company will receive a $100,000 non-dilutive grant and will receive mentoring and coaching from subject matter experts from the National Geospatial-Intelligence Agency and Capital Innovators. The COVID-19 pandemic requires the initial cohort to be conducted virtually, but future cohorts are planned to be held in person at the accelerator.

The accelerator concludes with a public demonstration day that allows companies to highlight the progress made during the program.

"The re-emergence of great...

Teledyne Clears Canada and Germany Antitrust Reviews for the

Previously, Teledyne obtained antitrust clearance in the U.S. on March 1, 2021, when termination of the waiting period under the Hart-Scott-Rodino (“HSR”) Antitrust Improvements Act of 1976 occurred. Subject to the receipt of additional required regulatory approvals in Poland, Turkey, China and South Korea, the transaction is expected to close in the second quarter of 2021.

In addition, all permanent financing for the pending acquisition was completed on March 22, 2021. Financing consisted of $3.00 billion of investment-grade bonds due 2023 through 2031, as well as a $1.00 billion Term Loan Credit Agreement and an Amended and Restated Credit Agreement with capacity of $1.15 billion both maturing in 2026....

Cesium Releases Free 'Cesium for Unreal' for All Creators 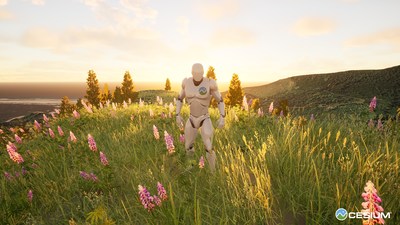 The implementation of 3D geospatial technology in real-world environments -- from building immersive experiences in artist-created scenes to those based on 3D content in its precise geospatial...

March 29, 2021 -- Marcin Grudzień from the Head Office of Geodesy and Cartography (GUGIK) in Poland has been named the new Chair of a European knowledge exchange network for INSPIRE experts.

The specialist in national spatial data infrastructures (NSDIs) will lead EuroGeographics INSPIRE KEN which focuses on sharing best practice in implementing the Directive. The group is part of the membership association’s network to support Europe’s National Mapping, Cadastral and Land Registration Authorities to improve their capabilities and role.

Marcin takes over the role from Dominique Laurent, National Institute of Geographic and Forest Information, France. Dominique, who was heavily involved in the both the INSPIRE Drafting Team for Data Specifications, and the Thematic Working Groups on Cadastral Parcels and on Buildings, was instrumental in the INSPIRE KEN’s formation and has led its activities for the past decade.

Léa Bodossian, Executive Director and Secretary General, EuroGeographics said: “We are extremely fortunate to count so many world leading experts among our membership and Marcin and Dominique are no exception. Both are well respected professionals whose insight and leadership are vital in cementing our members’ reputation for excellence, particularly during the review period of INSPIRE.”

“EuroGeographics has a strong...

Michael Drozd, Chief Executive Officer of AgEagle, stated, “Since I joined AgEagle in May 2019, our team has worked to leverage our extensive drone experience and expand our services to meet accelerating demands from the greater commercial and industrial drone marketplace. Although this was a year of unexpected challenges due to the global pandemic, I am incredibly proud of what our team was able to accomplish and firmly believe we are well positioned to continue this momentum. As proven by our record revenue and ability to expand margins in 2020, we have begun to gain significant traction and believe this is only just the beginning.”